Had such a great birthday, filled with cookies and not one, but TWO rainbow cookie cakes! I haven't seen a vegetable in days, which is a great way to start your thirties, guys. Thank you all so much for the wishes, love to you all! #levainbakery #yum #this isthirty

And no, I did *not* make my birthday cake this year. Though I have made rainbow cookies in the past, I decided to take a break from baking for myself this year. Also, my boyfriend strictly forbade me from doing so, because he’s nice, and also because I think last year I got a little scary whilst making this delicious monstrosity.

How was the birthday overall? Bittersweet might be the best word. Sweet because, well, see above, bitter because well, see me. But as I’ve heard time and again, thirty is weird. When I was ten, thirty seemed like *it.* It was the age when I’d have everything down pat, when I’d be acting opposite Mark-Paul Gosselaar in a hit feature film (nope, not elaborating), when I’d be poppin’ out perfect babies and livin’ phat in the hills. Which hills, I do not know. The Beverly ones seemed interesting, because OH HAYYYYY Dylan McKay. It should be noted that  when I was ten, I had trouble separating television from reality. That may or may not still be the case.

Instead, thirty feels like the age where an invisible hand decided to hold a mirror up to my life, and DAMN. DAMN DAMN DAMN has it been hard to look. Of course, if it’s not obvious, I  do feel lucky. Lucky that I’m still able to write and bake, lucky that I’m working, lucky that I’ve got some love in my life, lucky that I still have a few folks I can count on to whine and wine and dine with. But I’ll be the first to admit that I’m not taking this particular birthday as well as past ones, for various reasons. Maybe that’s necessary. Reflection is hard, but I’m hoping to come out of this funk feeling wiser, stronger and healthier.

Speaking of healthy, this dessert is anything but. BUT! It’s got pumpkin, you fall freaks! (I, too, am one of these. No shame, friends). Also, it’s no-bake, for all of my I-CANNOT-BAKE-FOR-SHIZ homies. Let’s do this!

3/4 cup of confectioner’s sugar, more if you’d like the peanut butter portion sweeter

Set aside either a 12-cup muffin tin or 24-cup mini muffin tin, and line the tin with cupcake wrappers.

Also, before we start, and before people start yelling at me over that article we all saw claiming canned pumpkin wasn’t real pumpkin… IT ABSOLUTELY IS. Snopes for the win!

In a medium-sized bowl, using a stand mixer on high speed, whisk together pumpkin, brown sugar and cinnamon. Beat in the mascarpone until fully incorporated, and set aside.

In a separate medium-sized bowl, combine peanut butter and confectioner’s sugar, adding more sugar to taste if you like it a bit sweeter.

Now, you can either just totally go crazy and combine your pumpkin and peanut butter mixtures full-on, OR, if you favor one flavor over another, add a bit of one mixture to the other until you’re happy with the taste. Really, you cannot go wrong, and if you have extra of one or both mixtures, they’re INCREDIBLE with french toast, waffles, or just totally naked. Originally, my plan was to have this be heavily-PB with a hint of pumpkin, but every time I brought a spoonful to Jimmy, he’d ask for more pumpkin. I finally settled on the measurements above, which will give you a perfectly balanced peanut buttery and pumpkin-y cup. Set aside this mixture for now.

To assemble your cups, coat each cupcake wrapper with a thin layer of chocolate. If you’re using full-sized cups, I’ve found it’s easiest to use a small rubber spatula to coat the bottom and sides. If you’re using mini cups, the back of a teaspoon is better. You want the bottoms and sides of your liners to be completely opaque with chocolate, but not terribly thick.

Once you’ve coated all liners, refrigerate for at least 15 minutes. Once the chocolate has hardened, place even scoops of pumpkin-peanut butter mixture into each cup.I made regular-sized cups and added a heaping tablespoon and a half to each cup. Cover each cup with more chocolate, and chill in the refrigerator again for at least fifteen more minutes, until the cups have hardened. Let them sit in room temperature for a few minutes before serving.

So I figured I might as well continue the tradition of absolute junk at all possible hours of the day, so these were enjoyed at breakfast. Pumpkin’s a fruit, peanut butter has protein, I am woefully under-educated about nutrition and will do anything I can to justify my sugar intake, you get how it is.

But how were they? They. Were. Perfection. My lazy ass also loved how quickly these cups went from being a mere rumble in my belly/twinkle in my brain to being actual, delectable desserts. These were fast, easy, and SO AUTUMN, you guys. MUST MAKE! 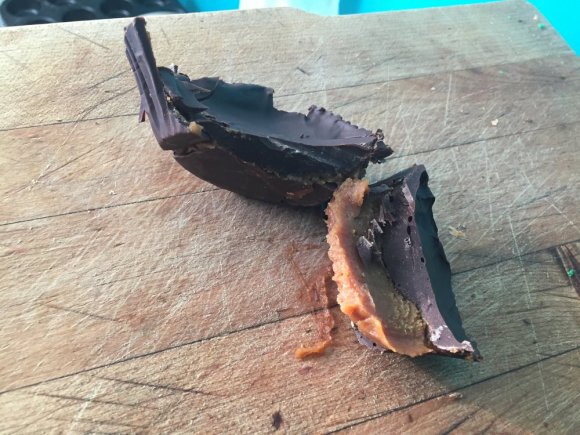 2 replies on “Peanut, Peanut Butter… And Pumpkin! (And Complaining, Because Duh.)”

birthday blessings! Love the term "whine and wine and dine". I may have to borrow that one 🙂