I am a special case of something special sometimes. Normally I’m on here either complaining about the weather or putting hexes on Stamos, but today I thought I’d do something a little differently, a bit more masochistic, and basically embarrass myself for your amusement and/or case study. Behold. 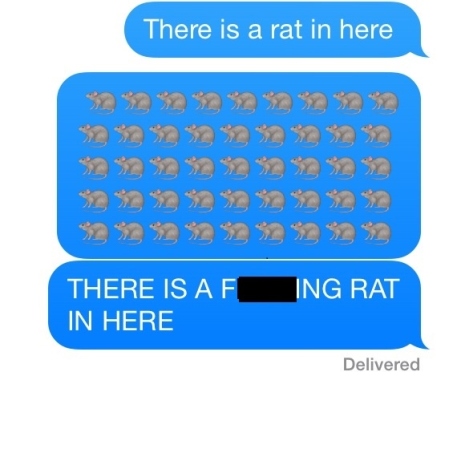 The above is a snapshot of a text I sent the other day to my boyfriend, who decided to make plans to be out the ONE NIGHT I FIND A DAMNED RAT IN THE APARTMENT. Superhero that I am, I promptly screamed, grabbed a bag of Oreos, and holed up in the bedroom. Before you ask, no, I did not desperately grab the Oreos as a means of sustenance because there was nothing else in sight. I had a choice between Oreos and a bag of grapes and I made the obvious decision to stress-eat delicious sandwich cookies whilst texting out rat emojis like a madwoman. I fully own all of this.

Those of you with souls might be wondering what happened to the rodent. Well… WHO CARES YOU GUYS?! Ok, fine, it’s gone. Jimmy insists it was probably so terrified of the giant brown baby scampering away from it that it ran BACK into the hole in the radiator. BACK?! HOLE?! He said this as if it were the most common occurrence ever. “Oh, yeah, sometimes baby mice (yes, fine, it was just a baby mouse, BUT STILL WTF MOUSE GUYS) live in the heating vents. He probably went back into his little home once he realized that I’m a neat freak and you eat everything in sight, so no crumbs for the little guy.” Home?! Little guy?! What is this magnanimous nonsense? Why is he talking as if this were the most normal thing in the world? Is it? Fellow city dwellers, do ya’ll just have a band of merry mice parading through your radiators, eventually popping out in the hopes that you don’t use plates when you eat things? Be on alert, guys. This could get real. 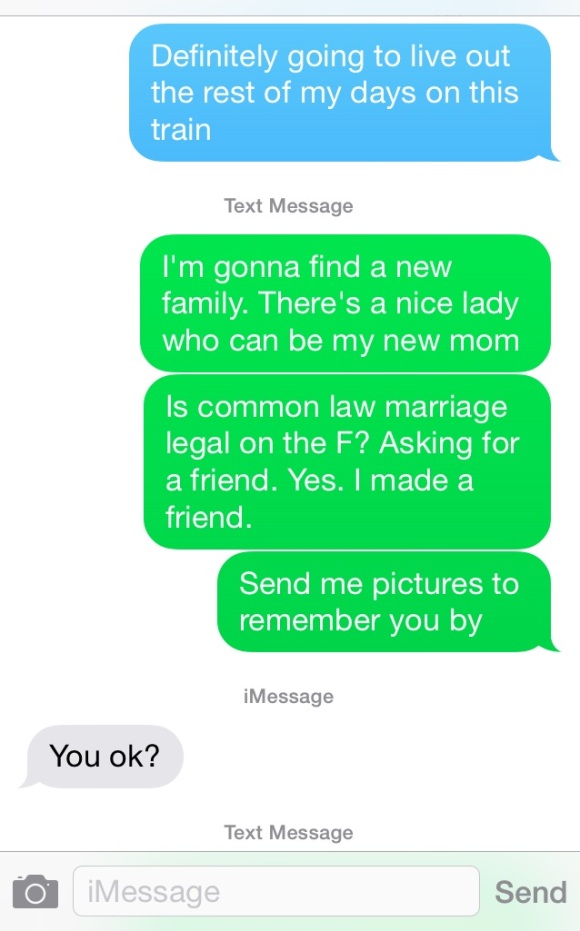 This second series is from a couple of mornings ago, when I was stuck on a stalled F train for half an hour and had basically completely cracked. Note the two-word response from my poor, perpetually concerned boyfriend. I know I wrote like three paragraphs about the rat thing and can only share a couple of sentences on this but, a. that’s basically as much as I am willing to talk about with this text bonanza, because I am still sort of silently crying to myself because some variation of this happens every.damned.day. on my commute and, b. this is all already enough for your dissertation. Get that degree, homie. Go forth and prosper.

So, texts like those are pretty common for Jimmy. In the beginning of our relationship, he frantically answered almost every one pretty quickly, but now he knows to just allow me some private time to cry to power ballads and self-medicate with chocolate. Also, while I was typing that paragraph, he decided, on a whim, to run downstairs to check on an elderly woman who lives directly below us, since our building has been doing renovations in some black hole none of us can find, and said renovations involve noxious fumes. He did not know this woman previous to this visit, he was just concerned about a complete stranger. That complete stranger could have been a serial killer, or an MTA Fat Cat! What a guy. A guy like that? A guy like that deserves cake. His own personal cake.

4 teaspoons of all purpose flour

1/2 cup of dulce de leche, store-bought or homemade (see below for one recipe)

For dulce de leche, preheat your oven to 425ºF, and pour one 14 ounce can of sweetened condensed milk into a small baking dish. Cover with aluminum foil and place dish in a larger dish. Fill the larger dish with water until water comes halfway up the sides of the smaller dish. Place in oven and cook for one hour, or until the milk is a deep brown color. Remove from the oven, whisk lightly, and then allow to cool slightly. Transfer to a heatproof jar or container and cover tightly. Refrigerate if not using immediately. This recipe will make one cup.

For your cakes preheat oven to 425ºF and generously butter and flour two 4-ounce ramekins and set aside on a rimmed baking sheet. Using a mixer on medium speed, beat egg and egg yolk together until doubled in volume and the eggs begin to ribbon. Add in dulce de leche until completely blended, then add in flour one teaspoon at a time. 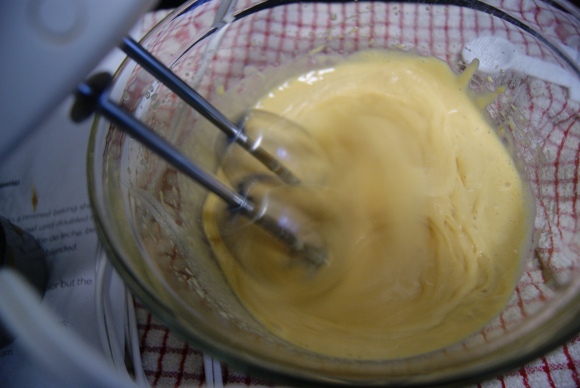 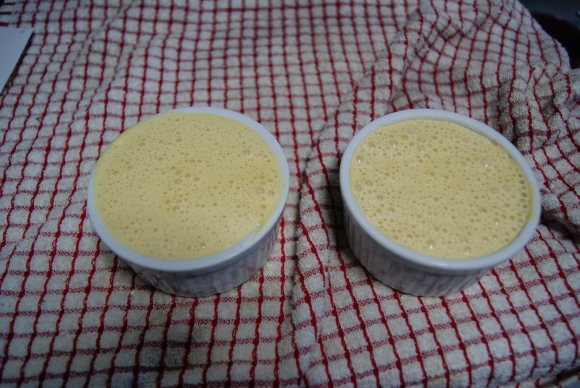 Place ramekins on baking sheet in the oven and bake for 12 to 14 minutes, until cakes have risen and are golden brown. You can either run a knife around the edges of the ramekins and invert onto plates, or simply serve them in their ramekins (which is what I did), but definitely serve them warm. 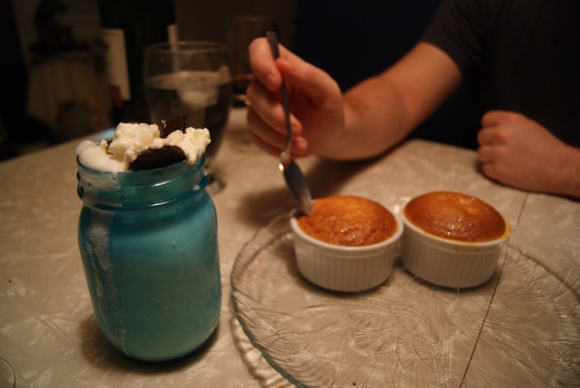 You’ll notice that the cakes are accompanied by a glorious-looking milkshake. I would provide the recipe, but it’s basically equal parts vanilla ice cream, milk and bourbon. Yes, I said equal parts. No, I don’t remember much of the rest of the night. 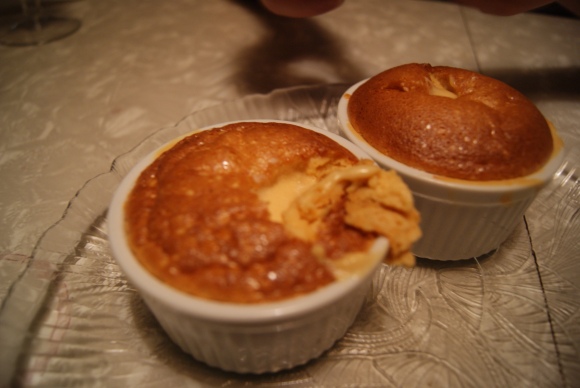 So, um, yeah. Yeah. YES. YES these were absolutely perfect. They were better than I ever could have hoped they would be. Absolute perfection straight from the oven. Make these for anyone who tolerates your complicated, panicky, strange self with nothing but love, and make them immediately.