Originally, this was going to start out as yet another post dedicated to all things pumpkin and Thanksgiving. Now it’s the post where I rant about how tired I am of the city life and need to hunker down in the forest somewhere. Why the forest? Well, I saw this terrible, terrible movie a couple of weeks ago. It was an independent movie that apparently garnered rave reviews at the Sundance Film Festival and caused me to worry about the fate of society (not because of anything particularly moving within the film, but because I can’t understand how a group of reputable professionals who supposedly know a little bit about cinema could stand this thing). I’m hesitant to tell you the name of the movie. As you can probably tell by now, I’m hesitant to even tell you the premise. But it involves a Sasquatch who sounds like James Earl Jones and enjoys peanut butter and jelly sandwiches. And it’s a drama. But all I could think of was this:

Just spectacularly awful, but I couldn’t look away, because a. I think I was amazed that the yeti costume from Harry and the Hendersons has held up so well and, b. the film was shot in the forests of Oregon and that kind of made me want to make the entire state my new hiding place.

Yes, I am having visions of picking up my bakeware and hightailing it westward. Maybe it’s the ol’ quarter-life crisis popping up again, or maybe it’s just restlessness from spending my entire life in Da Hurst (That’s Elmhurst, for all of you fancy folk who don’t know Queens. Please don’t Google Map me.), but I am tired. Some random old dude rammed into me on my way home from work the other day, just because he could! Seriously, he went out of his way to walk toward me and knock into me (Yes, I do believe he was certifiably deranged, but still). Some other random young dude stomped on my tiny foot on the F train that same night and did not apologize! ANIMALS!

The chances of me actually fleeing the state anytime soon are pretty slim, but I still think it’s time for a change, for the above reasons and trillions more that have nothing to do with baking. Maybe I need a new neighborhood to call home and a new challenge to completely sink into. Does anyone have an obstacle course you can throw my way, or perhaps a complicated mathematical formula in need of solving? I can’t help with the latter, but I’d be able to find someone who can and maybe make a new friend in the process. Maybe I can even teach the nerd to bake.

Speaking of baking… oh, this is a baking blog, isn’t it? Ok, this bread pudding is legitimately one of my favorite holiday desserts. I’d made it last year and could not wait to bust it out yet again this Thanksgiving. I’d pulled it from an interactive column that the New York Times started last year. All of the recipes are vegetarian or vegan (this one’s vegan), and all of the ones I’ve tried out have been amazing. And that’s coming from someone who enjoys cheese. And bacon. Oh bacon. Wait…no… let’s focus:

1/2 cup of brown sugar or maple sugar, or a mix of both if you’re wild like that

10 cups of cubed, crusty bread of your choice (I used a 14-ounce loaf of French whole wheat bread)

3/4 cups of semisweet chocolate chips (I used Ghirardelli which don’t have dairy in them, if you want to keep it vegan up in here)

Preheat your oven to 350ºF and grease a 9×13″ baking dish. In a blender, puree coconut milk, pumpkin, sugar or syrup and spices until completely smooth. 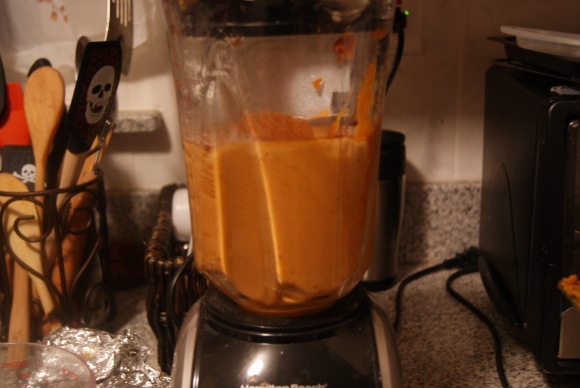 Toss your bread cubes with this mixture, then stir in chocolate chips until completely covered. Super easy, right? Even better: this can be a make-ahead dessert, in that you can stir everything together and toss this into the refrigerator, covered, up to three days before you plan to bake it. Um, in that case though, don’t preheat the oven until you’re really ready to bake. I guess that should go without saying, but I’d rather be safe, especially since ya’ll know where I live now.

Sprinkle on brown sugar evenly over the mixture, then bake for 25 to 30 minutes until the top is lightly browned. Cool for about ten minutes, then dust with confectioners’ sugar if you please, and enjoy.

I don’t think this picture does the pudding justice. I really love this dessert. I love it so much that I kept a good chunk of it back in my refrigerator. Sharing, schmaring, am I right? If you ever want to reheat the leftovers, I recommend throwing it back into the oven at 200ºF for ten minutes. Or, if you live in the woods, heat a skillet over a small bonfire. If you’re lacking wood, set out a couple of PB&J sammies for the neighborhood Bigfoot and you’ll be set in no time. God, that movie really ruined me.

3 replies on “Pumpkin Bread Pudding, And The Sasquatch That Changed Everything”

I had this at Thanksgiving, courtesy of this baker, and it was awesome! Thanks, Shibow. This sasquach says, Stay in the city and make this again!

Thanks, cuz! I’ll leave a trail of bread pudding to my new house in the forest just for you.

[…] be honest: you can tell from the title of this post that this was not my favorite bread pudding. This, on the other hand, is. It was pretty good, just not sweet enough for me, especially since I could […]