YOU GUYS. I just discovered this crazy amazing band. They are known as The Killers. They are stupendous!

I’m kidding, I’m kidding, I’m not that out of touch. Relax, cool kids. But, I have become re-obsessed with these guys for reasons unknown, though I’m not complaining. They really are amazing. On a side note, does anyone have a bajillion dollars kicking around that you’d like to use to buy me tickets to see them live? Just kidding. Not really. No…no I’m not really kidding.

Anyway, originally I was going to post “When You Were Young” to go along with this post, but that song and video are both hella depressing (and hella fantastic), and I figured you were all as sick of me and my complaining by this point as I was. This song’s probably pretty sad, too, but I’m a little bit too tired and a little bit too focused on trying to stay positive to notice. So…you know…smile like you mean it and whatnot.

Really though. I have posts and posts worth of crap to complain over. I have more stuff to complain about than I do stuff to bake. But, then, so do we all, right? I’m starting to think that maybe the only way to turn it all around is to turn it all around myself. And to maybe laugh at random moments as well. Like, really random. It scares the beejeebus out of people, and that makes me happy.

Something else that makes me happy is ice cream. Ice cream makes me so #%$(@-ing happy (I curse a lot, especially when I am happy). In my last post, I mentioned a trip to Vermont. On said trip, my boyfriend and I encountered something called a Creemee. This, supposedly, is just a regional term for soft serve, though I kind of think that’s bunk since this is the stuff dreams are made of. I tell you, I have never had a frozen treat so rich and decadent and, well, creamy. Since our return to NYC, Boyfriend has not failed to mention it at least once a week, nostalgically reminiscing on the Creemee as if it were a long, lost friend whom he misses terribly. In fact, he is, as I type this, on his way to Vermont for another one. Okay, okay, he’s going for other reasons too, but he kind of made it seem like he had one goal, and one goal only, in mind. To be fair, I asked him to bring me back one, as well. This will obviously not work for several reasons, the primary reason being that he’ll eat mine, too. No matter. I’ve figured out how to almost fully replicate them all on my own! Without an ice cream maker, because I am boogie-down broke! MUAHAHA! 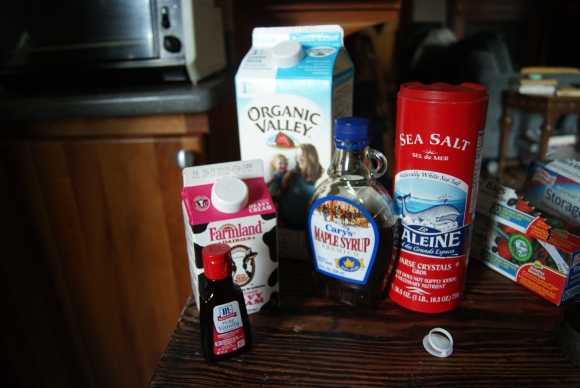 Maple Creemee (makes a little less than a quart)

Inside of a quart-sized zipped plastic bag:

1/3 cup of pure maple syrup (Grade A or B…B’s darker and stronger, which I heart)

Inside a gallon-sized bag:

Also, you’ll need a spotter and/or excellent upper-body strength. Hey, you gotta work for your Creemee around these parts.

This is super easy by the way, aside from all the exercise. Place all ingredients except salt and ice in your smaller bag, zip very very tightly (unless you want salty ice cream, gracias no) and shake around a bit. Then, carefully place half of your ice and salt in the gallon bag, carefully lay quart-sized bag on top, and cover with more ice, leaving enough room to comfortably zip the gallon bag, and zip it.

Here’s where the spotter/stretching comes in. Wrap a small towel around the bag and shake for ten minutes. Some of you are laughing at me for making a big deal of shaking a bag of ice for ten minutes. You people are buggin’. This is, like, not easy.

You can stop once your mixture is thick and custard-like.

Obviously you can’t see from the above, but, uhhh…that’s where we stopped. 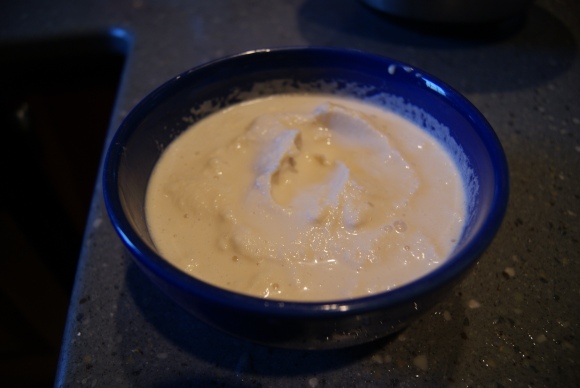 Now, this may not look pretty at all. Maybe it looks a little like white gazpacho, or hummus. Actually, it really does, doesn’t it? Well, it’s a creemee, I promise. And it’s all kinds of wonderful. Really. So wonderful, in fact, that my boyfriend secretly made two more batches of this stuff while I was away. Fortunately, he shared, but still. Two. Within days of this first batch. It’s that amazingly good. Also, if you have children, you can totally  encourage them to help you shake shake shake this stuff up. I am often, mentally, five years old and I really enjoyed making this. That should tell you everything.