Yeah…so we’ll get to that.

Originally my next post was going to be about buttermilk panna cotta. It’s easy, delicious and because I’m cray cray I like to write about things just after I’ve made them. I think it’s because I’m afraid that if I skip the panna cotta post and go directly to writing about the thing I made after it the panna cotta will re-form in my fridge, let itself out and coagulate all over my sleeping body. That is creepy, crazy, weird and disgusting and I deeply apologize.

I think I sort of just forgot about the panna cotta since I made it so long ago and have been slacking on posts. Then, a few weeks later during an adventurous trip to Duane Reade (we all have those, don’t we New Yorkers?), I decided to purchase some seasonal mistakes called Pumpkin Hershey’s Kisses. They were, as I sort of suspected, horrible. I keep a chocolate drawer at work, and pretty much everyone who opens it to grab something sweet gives these things the evil side eye and walks away. The drawer glowed orange until I decided to take these things home and try to work with them in thumbprint cookies. The result is below (please shield your eyes/the eyes of your children if you’re prudish or too young for this):

Boob cookies. I had accidentally made boob cookies. And once I realized what my baked treats were beginning to look like, I tried to add some variety by shoving mini-Snickers bars onto some cookies and averting my eyes very quickly and quietly. No matter, as the cookies still came out looking….like they looked. They also kind of sucked. No pun intended. Oh dear.

Whew. Well. Now that that’s out of the way, let’s move on to our star dessert, shall we? So this past Sunday was my birthday, and since I am kind of nerdy and like to bake things that I probably have no business baking, I decided to tackle making my own birthday cake. This is not sad or pathetic, but is instead empowering, fun, and super dangerous (more on that later). Let us begin.

S’mores Cake (because we don’t play)

1 cup of unsalted butter, softened, plus more for greasing pan

For the Chocolate Ganache Filling

For the Swiss Meringue

Preheat your oven to 350ºF and grease and line three 8-inch round cake pans with parchment paper (or, if you don’t have these, you can use a 10-inch springform pan instead and end up spending more than twice as much time in front of your oven like I did. I would not recommend this). In a medium bowl, sift together your flour, cornstarch, cinnamon, baking powder and salt and set aside.

Place butter in a large bowl, and using an electric mixer on high speed, whip butter until smooth. Add in sugar and beat until light and fluffy, which should take about 5 minutes. Add vanilla if you want and if you have it. If you don’t, might I recommend this? :

I have what can only be described as a deep appreciation for this yummy liqueur. It’s just beautiful, and will work wonders in this cake. Anyway, yeah, totally add this in if you have any on hand. Then, with your mixer at medium speed, add eggs one at a time, beating after each addition, until fully mixed.

Now, with mixer on low, alternate between adding in the flour mixture and adding in the milk, beginning and ending with the flour mixture. Pour evenly into pans and bake for 30 to 35 minutes, until the cake is golden brown and springs back lightly when touched. Cool the cakes in their pans for 10 minutes, then allow to cool completely on wire racks.

Now, let’s take a break from instructions for a hot second so I can tell you a little bit about my process. As I mentioned, I did not have enough pans to make a three-layer cake. So, genius that I am, I decided to use one very deep springform pan and divide the cake into layers myself once it baked. This basically tacked on about 45 extra minutes to my baking time, and freaked me out so immensely that I ran away from the cake and let my boyfriend do the separating.

Boyfriend also noticed that I was so stressed out about this cake– like a total freaking weirdo, I know– that I wasn’t breathing, and sent me away from the kitchen for a good twenty minutes. I don’t know why I told you that. I just did. Problems. They are mine.

Now, let’s work on that ganache, shall we? It’s very, very simple. Place chocolate in a small, heat-proof bowl and set aside. Place heavy cream and brown sugar in a small saucepan over medium heat and bring just to a boil. Remove from heat and immediately pour over chocolate. Let mixture stand for a couple of minutes, then gently stir everything together until the mixture becomes glossy. Chill until slightly thickened and cooled, but not set.

Spread the ganache across the tops of all three layers. If you happen to have graham cracker crumbs or cookie crumbs from boob cookies you made and hated, I’d recommend sprinkling these on top of the ganache. Set aside and get ready to make some meringue.

To make your meringue, place egg whites and sugar in a large heatproof bowl and set over a pan of simmering water. Whisk constantly until the sugar dissolves and the egg whites are warm. Remove from heat and, with an electric mixer, whip the egg whites until stiff peaks form. Once you’ve made your meringue, make sure to work quickly with it, as it begins to stiffen up pretty fast. 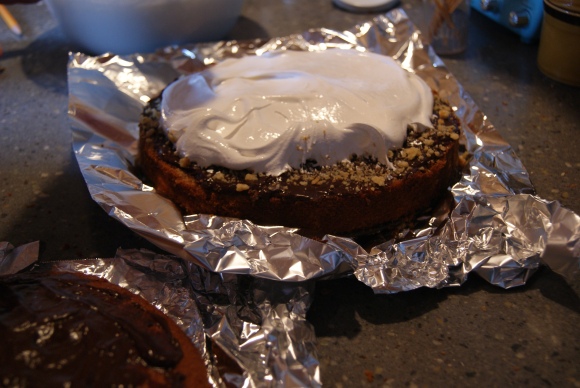 To assemble, place one layer of cake down on a cake plate and spread the top with meringue. Stack the second layer on top, repeat, and finish with third layer. Then, spread meringue all over sides and top of cake until completely covered. No need to make this look pretty, since it probably already kind of does with all of the meringue-peaks.

Now, once you’ve covered the cake, you can lightly brown it using a blowtorch or try to set the whole friggin’ top of it on fire by using your oven’s broiler like I did.

Okay. Let me explain. So I’d decided to try using the broiler because I’d read multiple reputable sources stating that this was the best way to get an even, light browning all over a meringue. That’s probably true, only I somehow did not realize that setting the top of the cake so close to the broiler would result in the cake becoming a fire pit. And I was watching the damn thing through the oven window like a hawk. Fires happen quickly. 😦

Fortunately, my boyfriend and I salvaged the cake before any real damage was done. He began picking burnt pieces off of the top and eating them happily. I joined in because I was sad and had decided to eat all of my feelings. Mercifully not too much damage was done to the cake….even if it did end up with a face only its baker could love:

So yes, I was a bit down over having set my cake on fire. My mood, however, picked up a few hours later when my lovely BF surprised me with dinner and drinks with my sister and best friends, who all really loved this cake. And not, like, pity love. Like second and third helpings and doggie bags full of to-go pieces love.

I’m still picking at what I managed to save. And believe it or not, I think I may have found my favorite cake in this thing. All in all, a wonderful birthday. Thank you, lovely people ❤

One reply on “Do Not Yell Fire In A Crowded Theatre. Do Yell Fire When You Set Your Cake Aflame.”

[…] had a piece of this cake has expressed nothing but wonder. It certainly rivals last year’s S’mores Cake and WILL be making repeat appearances in my […]