(This is here to distract you, but also this is here because Weird Al is a national treasure and is so, so right)

Hi guys. Wanna hear about the time I almost literally exploded on a busy street in Midtown? Yes, I am using the word “literally” correctly. I almost blew the &%(^ up two Fridays ago while walking to work. Instead of strolling down the street I normally take, I’d decided to cross in the middle of the block since the roads were empty– something I never do, since New York drivers be cray, but again, empty roads. Suddenly, there was a massive explosion– smoke, fire, giant boom– that shot up out of one of the grates I’d just been walking next to. That I’d just been centimeters from. Fortunately, as far as I’ve been able to surmise, no one else was hurt (I ran like a madwoman while a bunch of curious/dumb bystanders just…stood). An electrician friend of mine later confirmed that it had been a transformer explosion, which initially pissed me off because I thought he was trying to distract me from my shock with some garbage story about Optimus Prime. I’m not super duper bright when I’m scared. I guess the morals of this story are, 1. that Con Edison completely, utterly sucks and 2. it’s maybe time to reevaluate the way I’ve been doing things. As I told Sylvapotamus, it seems God moved the chess piece that is me, and perhaps there is a reason for that.

When I was younger, I wanted to be an actress. Growing up, the only people who looked like me were Apu from the Simpsons (a cartoon man voiced by a white dude) and Jasmine from Aladdin (not Indian and…also not human). As a preteen, I went to a casting agent who sneered at me as she told me to come back when I’d lost some weight and fixed my teeth. Obviously, that hurt, even though I’d be the first to admit that, if placed in a casting call for adorable, sprightly, precocious children and every other child but me came down with a mysterious, food-borne illness… the agents would probably cancel the audition (unless the audition was for pint-sized Orville Redenbacher impersonators). And so, I stopped going to casting calls, I stopped sending out head shots (no, I do not have copies of them, I think because the photographer who took them just, like, couldn’t even deal), and I threw myself into writing, which ended up being a saving grace for me. I even applied for a dual screenwriting/theatre program at a fairly prestigious college in Boston… and got in! Aaand then I didn’t go, due to a combination of having twelve dollars to my name, disappointed parents, and a paralyzing fear of maybe making it all happen and maybe not making it happen at all.

So now I’m a little bit depressed, possibly because I feel like I once had something great, something that was mine, something only I could do, something that came to me with an ease nothing– not human interaction, not calculus, not baking– has ever come close to matching. And now it sort of feels lost, and I feel lost, and I don’t know how to get it back, or if that’s even possible. So, what do you do when it feels like that thing you had is gone? I’m always reminded of Kristen Wiig’s character in Bridesmaids, and how she saw her dream of owning a bakery (!!!) come true…and then go completely to hell. She spends most of the movie down and out while Maya Rudolph doles out free puppies and whatnot… that’s kind of how I feel about myself (Kristen Wiig) and the whole rest of the world (free puppy-giver-outers). Which I suppose is why I stayed off of Facebook for a good while. FOMO and shiz, feel me?

So, do I still want to be a writer/actress extraordinaire? Uh… that’s hard. I don’t know. I don’t think I have the self-confidence to even attempt to take a risk like that, plus now Mindy Kaling exists so I can stop playing with my Princess Jasmine doll and wistfully sighing that “one day, I’ll just be you.” Actually, I stopped doing that a long time ago. Really. Promise. But if there was ever a time to figure things out, I imagine it’s now. While I do that, let me teach you how to make a galette, aka a rustic pie, aka lazy person’s pie, aka IT’S AWESOME.

for the dough (dough adapted from Savory Simple)

2 tablespoons of sugar, plus more for dusting

For the crust, you can either process the ingredients in a food processor or by hand. I prefer by hand, just because I’m a bit of a crusty control freak, but do as you please. By hand, toss together flour, salt, rosemary and sugar in a large mixing bowl. Cut in butter chunks gently, until mixture becomes crumbly. Slowly add in ice water, a little at a time, and stir together just until a dough forms. Cover and chill for at least two hours, and preferably overnight.

Once chilled, roll dough out to an approximate 9-inch round, then place either on a baking sheet covered with parchment paper or in a greased pie plate. Return this to the refrigerator.

Preheat the oven to 375ºF. While dough is chillin’, set out a large bowl lined with paper towels, and place plum slices inside. Allow to drain at least until most of the moisture is gone, then toss with blueberries and sugar.

Take your dough back out, and brush lightly with beaten egg. Sprinkle sugar over dough, then arrange plum slices and berries however you’d like. Spread preserves on top, if using. Now, gently fold over the sides of the galette, like so:

Brush the sides with egg wash, and sprinkle sugar along sides as well. Send into the oven for 22-25 minutes, until the fruit is bubbly and the crust looks done. Let cool for at least an hour.

THEN YOU MUST SERVE WITH ICE CREAM. 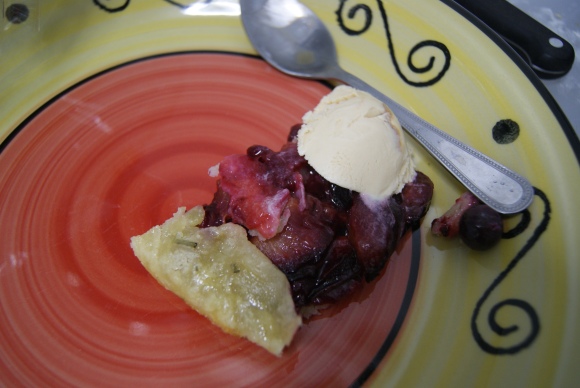 Not a lot, just a dollop, but… you must. You simply, simply must. #swoon