So it has come to my attention that I have a condition that needs addressing. No, it’s not my asthma, which I’ve had and unfortunately known about since I’ve been able to retain memory, though that’s decided to rear its ugly, suffocating head this weekend as well. It’s an affliction that seems to be incurable, unless I suddenly come into a significant sum of money and develop a desire to make nice with a cosmetic surgeon.

I have Bitchy Resting Face.

Ok, I’m messing with you guys. I totally knew I had BRF. I’m not a complete moron! It has, however, come up more frequently in recent days, which either means that a. I’ve gotten bitchier-looking as I’ve aged, or b. more people have been talking to me and have felt comfortable telling me I’m scary, which is probably impossible if I’m that scary, so it’s probably a. My bad, guys. I’m trying out a new eyeliner?

The brave few in life who have dared approach me fall into the category of My Boyfriend (there’s, uh, one person in that group) and Nice People Who Have Told Me My I Dropped My Cell Phone (there are a LOT of people in this group. The most recent is a dude who informed me of the dropped device, handed it back to me, proceeded to start a conversation with me, then proceeded to promptly end that conversation once he saw what he was dealing with. And I smiled, too!). Sometimes, I even try to make pleasant conversation with other people, and it fails. Yesterday I attempted to joke around with the nurse who was treating me (for the asthma, not my face, though that’s probably kind of an untapped market, no?) and she just… left? Then, whilst picking up my prednisone at Duane Reade, I decided to load up on Halloween Kit-Kats that were still on clearance (32 cents each!) and tried to be all self-deprecating with the pharmacist, who was NOT having it. I mean, you’re not really supposed to mix chocolate and asthma– why did you bestow this illness upon me, Baby Jesus?!– so maybe she was just being judgmental, but still. It’s totally my face.

How do you all deal with these problems, dear readers? It’s very difficult to make friends as an adult, that is a fact. It’s even harder when you’re workin’ with what I’m workin’ with. I’ve decided to try and push through it the healthiest way I know how: drowning my sorrows in booze. And booze-soaked cake. Also it’s almost Thanksgiving, and you all know I like this holiday a little bit, so we’re recipe testing. Also booze. For the soul. Maple Bourbon Banana Pudding Cake, anyone? Try saying THAT while you’re buzzed, amirite?*

Preheat your oven to 375ºF.  In the microwave, melt butter in a deep 2-quart baking dish. Stir in sugar and banana until combined, then whisk in egg and milk. In a separate bowl, sift together flour, baking powder and salt, then stir into baking dish until everything is mixed fully.

In a microwave-safe cup or in a saucepan (you can do this in the microwave, high power for one minute, or on a stovetop, medium heat until hot), heat maple syrup, 1/4 cup of brown sugar and 1/2 cup of hot water. Add in bourbon, then drizzle over the batter (it will seep to the bottom, and it will be glorious, just you wait). Don’t stir it.  Scatter pecans and chocolate chips on top, if using.

Set the dish on a baking sheet, then bake for at least 40 minutes (mine took closer to 50), until the top is golden. Let it cool for 5 minutes, then serve with ice cream if desired. 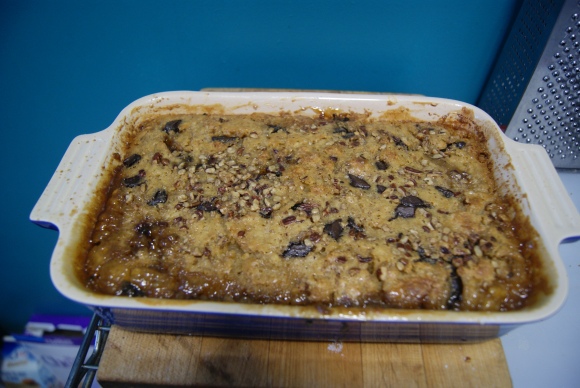 So, my feelings? Um, they’re mostly feelings of drunken happiness. More happiness than drunkenness, but there’s a significant amount of the latter in there, I think because I was sipping bourbon while this was baking. Why, I cannot tell you. Inspiration? Maybe I thought it would go well with asthma meds? That’s totally safe, right?

I mean, it may not look like much, but this thing packs a punch. It’s basically a cake-y top with a lovely, syrupy, lightly-bourbon-kissed pudding nestled underneath. If you’re trying to stretch your stomach in time for Turkey Day (um, I am) while inspiring your taste buds with fall favorites, this is the pudding cake for you. Oh, also, be over 21. There. A recipe AND a PSA. You’re welcome, America!

*Ya’ll know I’m kidding right? That’s super unhealthy. Pick up a journal, have some tea and have a good cry. Then call me in the morning. It’s better on the phone, you won’t have my bitchface to look at. Oh also I’m a little tipsy from, uh, recipe testing.