Lots of older people shake their heads wistfully, smile and gently say, “Well, it’s all downhill from here!” once I tell them that I’ve just turned twenty eight. I know it’s a joke, but I’ve heard it enough times in the past two weeks to be suspicious. Really, ya’ll? It can’t be that bad. Look at George Clooney! Hell, look at Flavor Flav! Flavor Flav has the best life ever.

Truthfully, there have been some sad times recently– too many sad times, to be honest– but, fortunately, also some very, very happy times. I’ve spent the past month or so struggling to weigh the great stuff against the horrible, and I realized that I have always had a serious negative bias. Are you shocked? That’s shocking, right? I’m trying as hard as I can to get rid of it, or, at least, shrink it to the point where you’re all giving me the shady side-eye and wondering what I’m on.

So that’s what I plan to do with this new year: be a little bit more positive. If you know me, you are laughing hysterically, given that I seem to have the unfortunate ability to turn even the greatest news (only when it comes to me, of course) into a complete nightmare. I assure you, I am changing. Slowly, very slowly, but I am trying. Even the negative events of late have put things into perspective, which is very necessary, given my tendency to sweat/cry/shake/cry/cry the small stuff. Here’s what I’ve realized: there isn’t time. There isn’t time to worry about my frizzy hair, or the almond milk I forgot to pick up, or the completely fixable minor work mistake I made. There isn’t time. And yes, I’ll still beat myself up over ridiculous situations from time to time, but now I’m also going to try to take as much time as possible to just be thankful.

1 cup of vegetable or canola oil

For the peanut butter frosting

For the peanut butter chocolate glaze

To start, preheat your oven to 350ºF and butter and flour (confession: I use cocoa powder instead of flour because I’m wild like that) three eight-inch round cake pans. You can also line the bottoms with parchment paper, but since I didn’t have any I was able to get away with a generous buttering/powder dusting. Set aside.

In a large bowl, sift together flour, sugar, cocoa powder, baking soda and salt until totally combined. Stir in sour cream and vegetable oil and whisk until fully mixed. Stir in water, then blend in vinegar and vanilla. Lastly, beat in your two eggs until completely mixed in and batter is formed. Yes folks, one bowl. Be still my lazy heart. Divide batter among your pans and bake for 30 to 35 minutes, until a cake tester comes out with just a few stray crumbs on it. Let cool in pans for 15-20 minutes, then invert onto cake racks. I’m going to second Deb from Smitten Kitchen in saying that these cakes are very, very soft. If you plan on frosting them (and don’t think twice about it, you plan on frosting them), it’s a good idea to wrap these cakes tightly in plastic wrap and freeze them for at least half an hour. It will firm them up and make them much easier to work with.

To make your frosting, beat cream cheese and butter together in a large bowl, with a hand mixer or stand mixer on high speed, until fluffy. Add powdered sugar, one cup at a time, scraping the sides of the bowl with a rubber spatula from time to time. Beat until completely combined, 2 to 3 minutes, then add in peanut butter and mix until smooth. 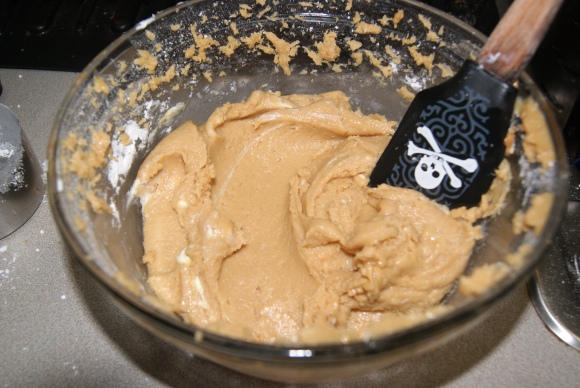 To frost, unwrap a cake layer and place on a cake stand/paper plate (I’m poor, guys). Top with a generous amount of frosting, then place another layer on top and repeat. Top with third layer, then frost top and sides. It’s easiest to frost the sides by doing a light “crumb coating,” where a thin layer of frosting is spread along the sides and top of the cake as a base. Then you can continue with more frosting layered on top of this base.

Lastly, we’re going to work on our chocolate peanut butter ganache. In a double boiler or in a bowl set over a pot of simmering water, combine your chocolate, peanut butter and corn syrup. Heat while stirring often, until the mixture is smooth.

Remove from heat, then whisk in heavy cream. Beat until smooth, then pour evenly over cake, like so:

Make sure to cover the entire top of the cake, then basically just wait for the goodness to drip down the sides. You can smooth the top with a rubber spatula, if you’d like, but I chose to keep things pretty rustic, because, um, I’m rustic and this was my birthday cake?

Refrigerate the cake, uncovered, until the ganache is firm. 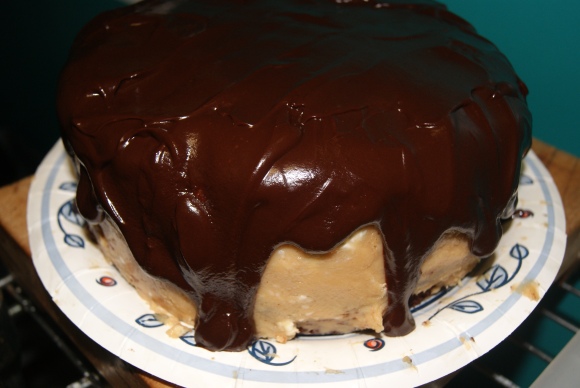 So this cake was terrible. I mean it obviously was, right? After all of that work, and those weird ingredients no one ever puts together, how could this have been anything but a disaster?

Guys, I’ve eaten my weight in this cake. I should be embarrassed. “Should be” are the key words there, folks. Everyone who has had a piece of this cake has expressed nothing but wonder. It certainly rivals last year’s S’mores Cake and WILL be making repeat appearances in my life.