How badass does this trailer look? I can’t stop watching it. Even my boyfriend, who actually saw Episodes 5 and 6 in theatres as a wee little lad, and is super psyched to experience the latest installment, is somewhat worried about me. As well he should be: see that BB8 in the sidebar under “Things I <3,” guys? I OWN IT. I know, I cannot believe it either. I purchased it during my “retail therapy is a legitimate form of therapy, stop judging me Jimmy” phase.  Do I love it? Unconditionally. Unhealthily. Completely. Did it do its job in curing me of the sads? Is this blog still called what it’s called?

Early birthday present from me, to me. #wortheverypenny #nosleeptilBB #BB8

And speaking of that, I’m going to warn you: this post is about to get kind of heavy, and kind of very long. But there are pop tarts at the end of it so it will all be worth it. In case you’re impatient or low blood-sugary, you can totally scroll past all of this. For those of you who’ve stuck around, I kind of feel like it’s time to talk heavy. We’ve known each other a while, right? We’re past the weirdness over who pays for what, if we’re Facebook official… hell, I used your toothbrush yesterday! Real talk about the sads, in a list format:

1. Originally I wanted to post this during Mental Health Awareness Week, which runs from October 4th to the 10th, but a. I was too scared and b. it [Freudian] slipped my mind. But, I have a close family member with a mental illness and have seen all of the misunderstanding, confusion, pain and stigma that comes along with it. We need to talk, guys.

2. I am ashamed to say I was too scared to write this because I’ve already faced some… I guess interrogation is the correct word, regarding the title and theme of this blog. I’m certainly open to talk about the stigma surrounding depression, but I’ve been caught off guard by the many–and I do mean many— people who have, especially recently, tried to “cure” me of it. And it’s not something that can be cured, unfortunately. If it were, I’d be shakin’ my rump-aa to Beastie Boys tunes on an unhealthy loop instead of dealing with this ish. And while I know that there are many, many people out there who struggle with it every second of every day, I am fortunate not to be one of them. But when it hits, it hits. This essay by the amazing Sarah Silverman does a much better job of explaining all this than I ever could.

3. On that note, we need to stop asking the question “What could you possibly have to be sad about?” My rational brain knows how bad some people have it, and it pretty much hates my irrational brain for being super selfish and thinking only of my own sadness (thus compounding the sadness, vicious cycle and all that). But, with that said, and believe it or not, I’m sort of obsessively private. When I started this blog, my original plan was to be the Batman of the internets, never revealing my true identity, forever in the shadows, with a killer fancy ride to roll through the mean streets of Queens. But, I was also hell-bent on using the name Sad Shibow, which is very unique to me, and blah blah blah people in my real life know I write this and then ask me that question in the first sentence, and then I have to answer it, but since I’m private I mostly squirm and bite my lip and hold back the ugly cries.

4. I don’t know if I’ve become sadder as I’ve gotten older or if I’ve just become more open about it. If I had to guess, I’d guess the latter. A whole hell of awful situations rained down on me and those around me in my early twenties, and mercifully this time in my life is nowhere near as dark as that was. But as I get older, tough times do seem to hit me harder. Losing a best friend, losing a few friends, being disappointed in where I am professionally, the FOMO, (OH THE FOMO!) and the weight of knowing I’ve disappointed other people I love can all routinely send me into very unattractive bawling fits. It happens. It creeps up on you. Some days I feel like I can handle all of the garbage and more, and sometimes I feel like burrowing into a hole I dug for myself in the shady park behind my building. It’s scary to talk about, but I’m talking about it in the hopes that other people will, too. At the risk of sounding nauseatingly corny, sometimes you send signals out into the universe in the hopes of locating your tribe. Sometimes, instead of “buck up and stop your whining,” you want to hear “I understand, and I can relate. Let’s be friends, despite your weird Resting Bitch Face and affinity for nerd stuff.”

5. Different things get different people out from under that dark cloud. For some people, it’s medication. For others, it’s exercise. For me, it’s writing. And baking. Oh, yes, this is a baking blog isn’t it? This is the part with the Homemade “Pop Tarts.” The ones filled with homemade pumpkin butter.

For the pumpkin butter (adapted from Minimalist Baker)

1 15oz can of pumpkin puree

For the tart shell

3 cups of all purpose flour

12 tablespoons of cold butter, cut into small chunks or grated

Now, let’s start with that pumpkin butter, yes? You could go the store-bought route, but this is a crazy easy recipe and you’ll be so damned proud of yourself for going DIY. Place all pumpkin butter ingredients in a large saucepan and bring to a rolling, bubbling boil, stirring frequently.

Bring heat down to a simmer for at least 20 minutes, then pour into a heatproof container. Let cool before refrigerating until ready to use.

Now let’s work on our tart shell. We’re basically using a pie dough. If you’d like, you could halve the above recipe and use the other half of your dough for a kickass pie at a later date. In a large mixing bowl whisk together flour, salt and sugar. Add in the butter, then mix in with a pastry blender or fork. Use your fingers to continue to mix everything together just until it feels like wet sand. Stir in your egg mixture with a fork until a dough begins to come together.

Turn the dough out onto a flat surface and knead it until it holds together. Divide the dough in equal halves, then wrap each in plastic wrap and refrigerate for at least an hour or up to one week (dough can also be frozen for up to 6 months, for those emergency pie sitches that I KNOW we all have).

Working with one half, roll out dough into an 11 x 13 rectangle, then cut into smaller rectangles, about 5″ x 3″ or, you know, Pop-Tart size, and lay on a baking sheet. Spread about a tablespoon of pumpkin butter onto a rectangle.

Top with another rectangle, and crimp the edges with a fork. Pierce the tops of your tarts with a fork to allow heat to escape, unless you like your tarts exploded and unavailable. Sprinkle a bit of sugar on top of each tart if desired. Cover and freeze for at least 2 hours.

Preheat your oven to 375°F. When your tarts are fully frozen, send into the oven for 25 to 30 minutes, until the tops are fully browned. Allow to cool for ten minutes on baking sheet, then transfer to cooling racks to cool completely. 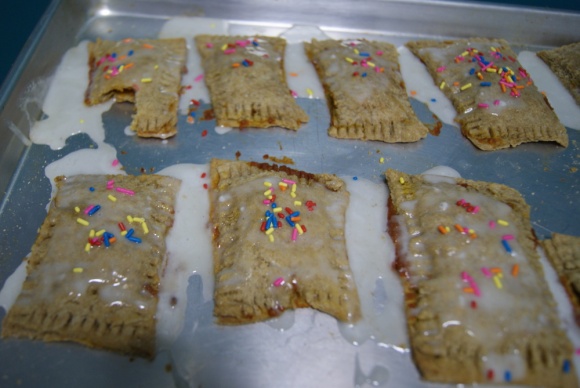 I know what you’re thinking…LOLOLOLOL. It’s the glaze, guys. I won’t even get into it. It was hell on earth– delicious, but messy, messy hell. If I were you, I’d top these with powdered sugar and call it an evening.

BUT if you can also see the giant bite in that picture, you know I could not resist trying these. And damn am I happy I did. If I were you, I’d toast these before munching on them, just like the real deal. Use The Force. Or, um, a toaster. Whatever floats your houseboat.

Save Up To 65% During The Biggest Cookware Sale EVER at SurLaTable.com! Just In Time For Thanksgiving!